Programming is like puzzle solving. Let your child try out the puzzle. Programming languages are used to create programs to control the behavior of a machine or to do something useful and interesting like games. Just like human languages, programming languages needs to be learned. Learning a traditional language can be overwhelming for kids but they will really enjoy if… END_OF_DOCUMENT_TOKEN_TO_BE_REPLACED 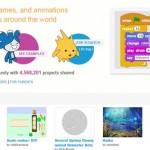 Kodu Game Lab http://fuse.microsoft.com/projects/kodu Kodu lets kids create games on the PC and XBox via a simple visual programming language. Kodu can be used to teach creativity, problem solving, storytelling, as well as programming. Anyone can use Kodu to make a game, young children as well as adults with no design or programming skills. Scratch – Make your own animations… END_OF_DOCUMENT_TOKEN_TO_BE_REPLACED